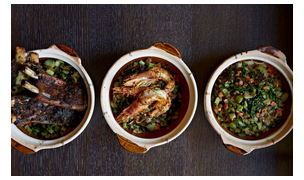 On Tuesday evening Esquire Magazine will unveil the winners of their first annual American Food & Drink Awards at The Cecil in Harlem, NY.

THE CECIL will be named the ​2014 ​Best New Restaurant in America.

Inspired by the travels, exploration and study of the African Diaspora its goal is to connect communities through food, comfort and hospitality.  Afro / Asian / American cuisine is a fusion of the best of what each of those distinct food cultures has to offer.

It traces the global migration of African-descendant people through the influence of African spices, textures and cooking techniques on traditional American, Latin and Asian dishes.

Guided by this concept, Executive Chef Smalls and Chef de CuisineJoseph “JJ” Johnson have conspired to create unique plates that combine the familiar with the unexpected.