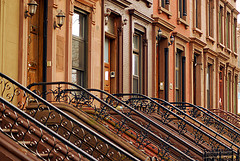 By HarlemGal for HarlemCondoLife
I always say “one can’t swing a bat lately without hitting the word “Harlem.” The Financial Times, the UK-based business paper, has now featured Harlem in their April 30 House and Home edition. Not too long the FT featured Red Rooster as well. This article quickly goes over Harlem’s rich history, mentions how crime is basically much better throughout New York City especially Harlem in the last ten years,and Harlem’s upswing in major change began back in 2004/2005. The article goes on to interview two homebuyers, one who bought a brownstone for under $1 million and the other who purchased a penthouse apartment on Frederick Douglass Blvd. Both homeowners talked about how much space one could receive in a home in Harlem and within budget. However, one homeowner stressed why they came to Harlem: “I like the sense of diversity I’ve found here.”

About the Author: Harlem Condo Life