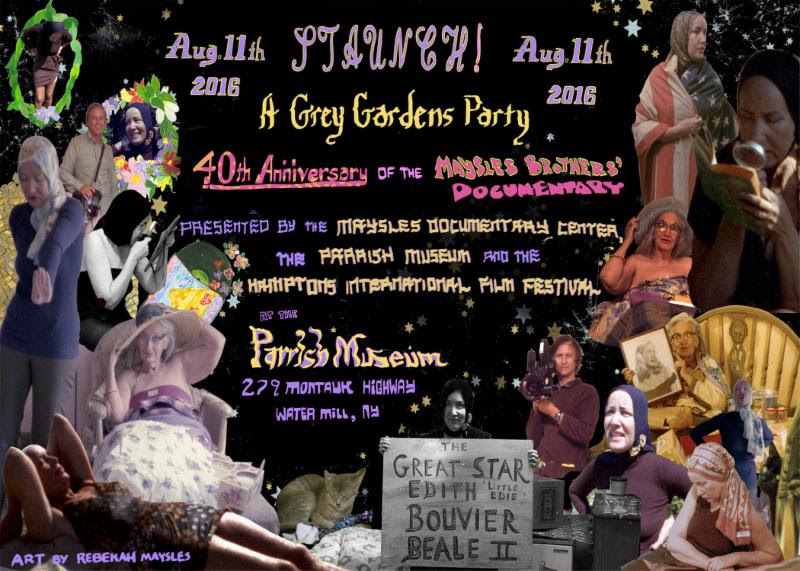 Thursday, August 11th, 5:00pm
Staunch: A Grey Gardens Party
(Celebrating the 40th Anniversary of the Maysles Brothers’ Classic)
Parrish Art Museum
279 Montauk Highway
Water Mill, NY
Join us for a 5:00pm “Edie” costume contest and parade, followed by a 6:00pmconversation and screening of excerpts from Grey Gardens.
The Maysles Documentary Center, The Parrish Art Museum and Hamptons International Film Festival are proud to co-present a “site specific” conversation and excerpts from the cult classic documentary, Grey Gardens (1976, Janus Films, 95 minutes, produced by Albert Maysles, David Maysles, and Susan Froemke; and directed by the Maysles, Ellen Hovde, and Muffie Meyer) at the Parrish Art Museum on Thursday, August 11th.
Grey Gardens reveals moments in time in the lives of the eccentric Beales, a mother and daughter who were related to Jacqueline Bouvier and lived in squalor in their 28-room East Hampton estate on Georgica Pond. Panelists participating in the conversation include Harlem historian Michael Henry Adams (Harlem Lost and Found), Grey Gardenssubject Jerry “the Marble Faun” Torre, Grey Gardens editor and producer Muffie Meyer, and Sara Maysles (daughter of Albert Maysles and co-author of the book Grey Gardens).
In addition, following a long-standing tradition at Grey Gardens screenings, audience members are invited to dress in costume as “Big Edie” or “Little Edie” Beale. The costume contest will be judged by Iris Apfel and Jerry “the Marble Faun” Torre. Prizes included limited edition Grey Gardens memorabilia including the original film poster and a new limited edition poster for this event, with art from Rebekah Maysles.
“Grey Gardens is a masterful documentary that captures the idiosyncrasies of an isolated family of renown living in the heart of the Hamptons but happily stuck in the past,” said Andrea Grover, the Century Arts Foundation Curator of Special Projects at the Parrish. “The evening will be enriched by a panel of specialists and fans who respond to some of the most memorable moments in the film.”